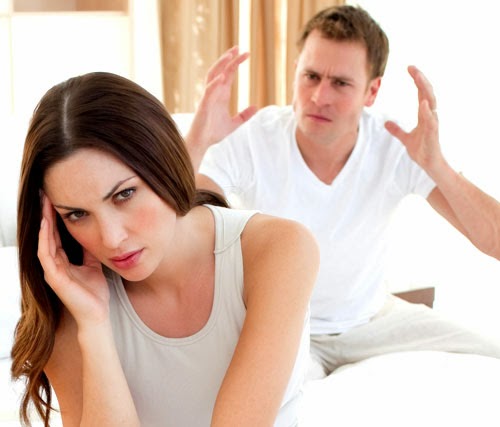 A woman and her husband quarreling

Quarreling in marriage is a normal part of marriage when it involves two people from different backgrounds come to live together as husband and wife. Living with another person inevitably leads to differences in opinion, misunderstandings and sometimes hurt feelings. There is a difference between healthy or productive quarrel, mean-spirited fighting that leads to more misunderstanding and negativity. People often don't fight fairly because they don’t understand what they are really fighting about. Feelings of rejection or hurt are sometimes diverted.


Being aware of what it is that you are truly upset about can help you avoid fussing about issues that don’t really matter. The following tips will provide some additional tools to help you keep quarrels at least to a healthy minimum in your relationship.

Be aware of the mood of your spouse
Some women become moody, irritable or emotional during certain periods in of their life especially during their menstrual cycle, pregnancy and when overstressed. Men also have times when they are less than rational. Some men become extra cranky if they haven’t eaten, haven’t had sex in a while or are experiencing stress at work. Try to avoid discussing sensitive issues at these times. And if your spouse tells you that you are not acting like yourself, instead of becoming offended, consider that he or she might be right at that particular point in time.

Know when to surrender
There really aren't that many issues worth fighting over. Choose your battles wisely. Think back to your last fight, does it really still seem as urgent and compelling to you? Do you even remember it? If you don't have to concede your values or your dignity, surrendering can bring much peace of mind for the both of you. If you know that something is very important to your spouse but doesn’t matter as much to you, give in graciously. It will show him or her that their happiness is important to you.

Try to express vulnerability and hurt instead of anger
Anger is a secondary emotion that usually stems from some other emotion such as hurt, embarrassment or disappointment. Your spouse is more likely to respond with empathy and understanding when you tell them why you are feeling angry instead of being moody and refusing to say exactly what the matter is which I know most ladies including myself usually does Lol. He or she would much rather try to see your side of things when you are hurt and vulnerable than when you are accusing and yelling out at him.

Honestly consider your spouse’s point
Often in a quarrel both partners are so concerned with being right that rather than truly listening, they are simply waiting for the other person to stop talking in order to jump in with their own counterpoint. This leads to frustration on both sides and often results in insults or accusations. Try to stop yourself from responding to your spouse immediately and instead consider what he or she has said. Your spouse may have a very wise solution that you might miss if you are too focused on preparing your next point.

Keep a sense of perspective and humor
Don’t take yourself too seriously. We often put too much emotional investment into quarrel most times that are really very unimportant. The fact that your husband leaves his dirty socks all over the floor or that your wife complains about your mother might indeed be irritating, but it is not worth ruining your marriage. If you can recognize that you are probably reenacting the same fights that couples have been having since time immemorial, you will be more likely to be able to laugh at yourselves and get over it.

Don’t talk back at him when you are angry.

In a situation where you and your husband are arguing or quarreling over an issue, I will advise you the wife to keep quiet at that moment to avoid saying unnecessary words to him, I know it can be difficult and we all tend to get provoked easily but sure we can always work on our temperament.

Marriage is indeed a beautiful thing ordained by God we need not quarrel and fight over unnecessary things.
Source: http://www.familyshare.com/
Posted by Unknown
Labels: family, Relationship