Reasons why you should avoid high intake of milk during pregnancy 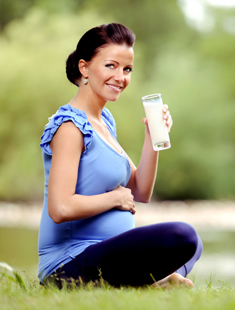 A lot of research have been coming up these days with a lot of weird results coming up Lol... I just bumped into this particular one and I couldn't help but share it with you all, especially for the reading pleasure of my pregnant readers.

Pregnant women who drink a lot of milk put their babies at risk of having an iron deficiency during an important phase of development, New Zealand researchers said this last week Friday.

Iron is essential for healthy brain development, and a deficiency in babies and toddlers, when the brain is developing rapidly, is associated with small, but important differences in brain function, behavior and learning.

It found that in New Zealand that seven percent of new babies were really iron deficient and then it was established that iron stores were lower in babies whose mothers consumed higher quantities of milk during pregnancy.

"While milk is an important source of calcium, it is a poor source of iron. Milk is also quite filling and so can reduce the appetite for other foods that are better sources of iron," pediatrician Cameron Grant said in a statement.

Iron deficiency is the most common micronutrient deficiency worldwide, with pregnant women and children under five years of age being most at risk.

The above-mentioned condition is twice as common in New Zealand children aged six months to two years than in children of the same age living in Australia, Europe and US.

"An alternative would be to increase the nutrient content of milk consumed by mothers-to-be to keep both the mother and child healthy," he said.

Writing out your story can also help someone, and you can also share your pregnant / birth story here, simply mail me at giswithtessy@gmail.com.