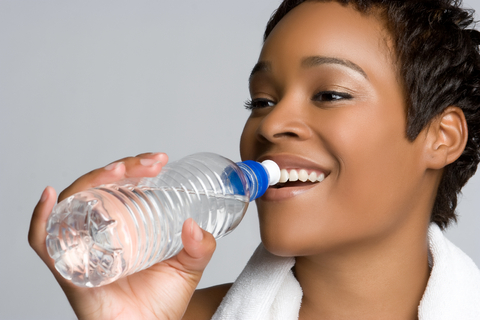 A picture of a woman drinking water

According to the Mirror, at least 14 people have been confirmed dead from drinking too much water while doing sports and exercise, according to new research.
Victims of water intoxication include marathon runners and football players and deaths have so far been recorded even occurred during yoga and bowling.
It is advised that those who are playing sports or exercising should drink water only when thirsty and not “preload”, health experts.
Filling the body with liquid or even sports drinks, can cause a life-threatening condition EAH (exercise-associated hyponatremia).
Health experts also stated that excessive fluid intake does not stop fatigue, muscle cramps or even heat stroke.
According to Dr James Winger of Loyola University, Illinois, said: “Muscle cramps and heat stroke are not related to dehydration.
"You get heat stroke because you are producing too much heat.”
Some of the symptoms include lightheadedness, dizziness, nausea, puffiness and gaining weight during an athletic event.
In severe cases it can lead to vomiting, headache, altered mental status such as confusion, as well as seizure and coma.
It has occurred during en!durance competitions such as marathons, triathlons, canoe races and swimming; military exercises; hiking; football; vigorous exercise during college initiation rituals; and even yoga and lawn bowling.
Most times athletes often are mistakenly advised to drink a lot of fluid than their thirst dictates by, for example, drinking until their urine is clear or drinking to a prescribed schedule.
But one thing he stated is that excessive fluid intake does not prevent fatigue, muscle cramps or heat stroke.
There is no universal rule about how much water is too much, but the Mayo Clinic in New York suggests we drink at least eight 8 glasses of fluid a day.
But exercise calls for an extra 2.5 cups while during warmer temperatures and pregnancy women should drink more for healthy growth of the baby.
Photo credit: http:beautylicious-juliet.blogspot.com
Posted by Unknown
Labels: General knowledge, Health